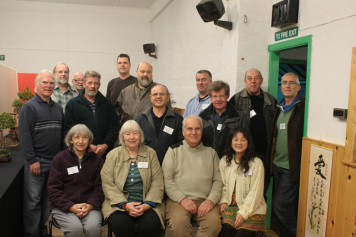 With Swindow & District Bonsai Club's support two local clubs the Middlesex Bonsai Society and  the Surrey Heath Bonsai Club based in the Heathrow area staged the first ever Heathrow Bonsai Show on Sunday 21st November 2010 at The Barn, High Street, Harlington, Middlesex. it proved a great success and will hopefully fulfil its objective  of  raising Bonsai awareness in the area  and increase the  membership of local clubs.

A  presentation of slides by Reg Bolton showing  the inspiring  2009 Asian Pacific Bonsai Show in Taiwan provided ongoing  interest for the visitors throughout.

Our thanks must goes out to the many helpers who made  the show a great success, so successful in fact, that we plan to repeat it to hopefully an even greater audience again next year on 6th November 2011.