If you wanted to see diversity in bonsai trees then you needed to go to Heathrow Bonsai show this year as this was the place to see that.


​with displays made up of 102 exhibitors showing 198 trees this year from all around the UK, which was incredible and some of the artistry was amazing. 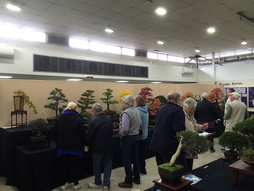 If you haven’t been to this show before then add it to your calendar for next year, as this is one of the friendliest shows with a relaxed and fun atmosphere.
​One of the core values of this show is providing an opportunity for clubs and societies plus individuals to display their bonsai of all levels together for everyone to enjoy. It has a high general public attendance too which helps to promote the bonsai hobby out to a wider audience and many went away with a bonsai purchase.

The catering was excellent and everyone got to enjoy the bacon rolls, burgers, teas and coffees that were available on the day.

Plus the show was also about raising monies for Royal British Legion Poppy Appeal, so all in all everyone had a great day, congratulations on the 6th successful Heathrow Bonsai show
More articles of Heathrow Bonsai show by Amelia Williams can be found in Swindon & District Bonsai website
6th Heathrow Bonsai Show 2015
Swindon display @ Heathrow
​Autumn @Heathrow